The 2020 guide to intercultural leadership

Global people skills aren't optional any more - 2019 made this message clear. Global business reached managers even if they

Global people skills aren’t optional any more—2019 made this message clear. Global business reached managers of tiny startups in Mumbai or multibillion firms in Manhattan even if they never went abroad. Many companies I advise and coach have management teams with more nationalities than members, zigzagging between appointments in three continents. Virtual sourcing, outsourcing and customer care have made even the simplest operations intercultural. Even if every single employee comes from one city, migration makes cultural acumen an essential skill for their bosses. If linguistic, national or religious differences do not get monocultural-minded leaders in trouble, then gender, age or clashing lifestyles will.

Globalisation boosted the study and training of intercultural skills. By the turn of the millennium, a formula was widely accepted: when entering a new culture, first observe its responses and habits, then adapt your behaviour and repeat until the new culture becomes routine. This model proved simple, rational and completely misleading for two reasons. First, generations of explorers already knew what modern expats had to learn the hard way: cultural challenge is more emotional than intellectual. Second, an interconnected world undermined the very concept of entering a foreign culture. In the half-Indian management team of a French car maker’s Shanghai office I often visited, who should adapt to which culture? How about Alibaba’s Silicon Valley campus? Or a United Nations office in Cairo?

Global mobility through the early 2000s tossed countless business people into a cultural limbo where ‘adopt, adapt and improve’ simply failed. Faced with an endless variety of views and habits, international businesspeople (which increasingly meant most businesspeople) struggled between two flawed strategies: either to follow consistent but impractical mental paradigms (like the ice-berg model) or endlessly memorise random cultural tricks (the art of handling business cards in Asia). Some responded with better mimicry. They adjusted fashion and transportation choices. They rehearsed the surrounding culture’s body language. It seldom works: a pair of Tod’s, a Vespa and wide hand gestures will not make anyone Roman. Instead, successful intercultural managers I met in recent years realised: if you get lost by following a map closely, it must be the wrong map.

Awareness: What is intercultural leadership anyway?

Partnerships like a French-Chinese-Indian management at today’s Peugeot existed before, but most people lived and died without meeting them. For millennia, human communities were small, familiar and homogenous, interacting with strangers mainly through war and trade. The difference was obvious: traders politely arrived in small numbers, warriors in noisy crowds. Traders tried to follow local habits—otherwise, they left empty-handed, or never left at all. Fighters came to change things, and often succeeded. Meanwhile, villages became global, and today’s interdependent, international and intercultural reality frequently triggers the wrong instinct from our deal-or-die past. If you have ever negotiated alone with a group of exotic business partners, or delivered a public speech, you know how hard it is to convince your alarmed brain that staring strangers are benevolent.

The weakness of the usual approach is its apparent strength: simplicity. If you worry about your first team meeting as Head of Compliance at Budweiser in Russia, it says, learn the culture and act it out. But which culture? Russia? Budweiser? The USA? Beverage executives? Beer makers? Beer drinkers? Successful leaders I met in 2019 had realised two fundamentals about working across cultures. One was to engage individuals rather than the abstractions we call ‘cultures’. Whatever the goal of cooperation is, some people are already sold on it regardless of their passport colour. And in every multicultural team, there are a few sceptical influencers whose attitude makes or breaks a leader’s success. Another was that any existing cultural benchmark (national, corporate, or otherwise) will make someone feel excluded. Therefore, a leader’s job is not to understand and implement a value system: it is to create one.

Twenty years of consulting showed me a wide range of intercultural management methods, both effective and defective. Most failing leaders tried to impose a unified code onto themselves and their people, following local traditions or corporate ideals. Some celebrated diversity by playing live Tetris with inconsistent approaches to time, money, quality, cooperation and conflict. They usually saw their teams cascade into alienated cliques, silos and conspiracies. Successful intercultural managers I know, on the other hand, approached mixed teams as tribes with diverse personalities, histories and interests. Often inheriting long-mismanaged firms and projects, they accepted the complexity of personal, professional and wider cultural differences in human communities, and engaged their teams on three levels: head, heart and gut. Neglected, those forces guarantee failure. Well understood and harnessed, they move mountains.

Even a dozen Japanese engineers from Osaka will clash if the boss is bad enough. Add a few American, German and Korean colleagues and watch the fireworks explode. Bosses chanting ‘We are all equal’ and ‘We are all different’ fight similarly futile wars with human nature. Communities need both comfort and challenge, so smart leaders of mixed teams do something surprising: they encourage the very cliques managers usually avoid. They start with personality, connecting pairs and triads of like-minded people. Go-getters, visionaries, nurturers and perfectionists bond naturally, regardless of cultural identities. Subsequently, leaders can combine these units into multifunctional teams, and delegate according to natural and professional strengths. Bold salespeople set targets, cautious financiers sharpen them. Visionaries challenge comfort zones, nurturers recreate them. Leaders, like ship captains on choppy waters, maintain balance and direction.

Initially, this feels bizarre not only since it encourages ‘tribalism’, but also because it leaves the most obvious cultural factor last: who is American, French, Persian or Japanese. But in International teams, few people pick friends based on nationality: they bond according to temperament and personal history, the strongest elements of our identity. Intercultural leaders must notice and observe connections, use data tools to assess them and include results in their strategy. Can they ignore nationality or ethnic heritage altogether? Of course not. But as Culture Map author Erin Meyer writes, comparing our cultures is as sensitive as discussing our mother: it requires trust. In the intercultural Babel of modern business, that trust must originate somewhere, and smart leaders rely on the basics to create it: people’s character, interests, experiences and aspirations. That is why most cultures instinctively recommend small talk about trips, foods, babies or sports before serious business.

Leadership teams I coach, train and advise establish basic trust before discussing each national culture’s wisdom and its business applications. Culture maps confirm folklore: firms can learn determination from Russia, flexibility from Brazil, mutual respect from Sweden and precision from Germany, which is why we prefer Brazilian dancers and German cars to the other way around. But as Global DISC developer Csaba Toth likes pointing out, few people are ‘typical’ for their home cultures. Effective leaders engage the personal before they discuss the cultural. Especially when a conflicted team becomes dysfunctional, I recommend Dave Logan’s Tribal Leadership method: focus on individuals and problem-solving pairs until performance improves. There is no culture where ‘How do you feel at our firm’ and ‘What could I do differently’, asked in confidence, are inappropriate questions. Struggling teams must solve gut-level existential conflicts before they consider vision, collaboration or strategy. Globalisation and technology will never change that basic human fact.

Great examples abound. L’Oreal assigns former expat kids to culturally challenging leadership positions for the flexibility they developed at childhood. Danieli embarks Asian managers on half-year exposure experiences at its Italian headquarters. Many global firms create connections by bunking business travellers together in hotel rooms, or hosting family days. They then transform acquaintance into performance, but never take trust for granted. People, teams, firms and countries can lose trust just as quickly as they gain it—think of current US-China relations. And this year just like before, leaders with 20-20 cultural vision will shift our focus from what divides to what unites: human nature, our aspiration to improve, and how business can make it a bit easier.

Read next: Foreign business in China in 7 questions 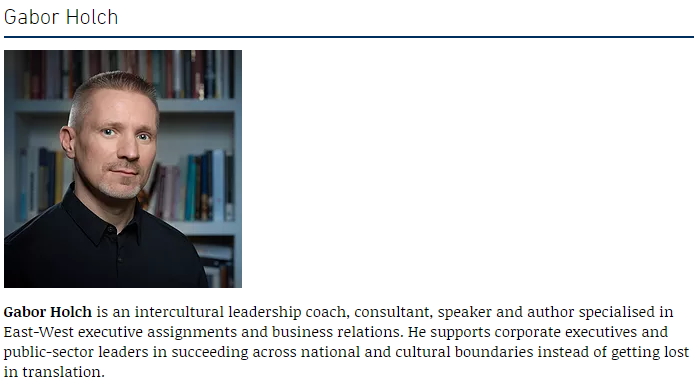