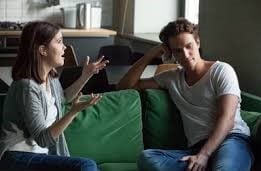 Okay, now here is where there is so much confusion in relationships. It has to do with money! One person is OVERLY spending while the other person is working twice as hard trying to catch up to pay the bills because the other person is blowing through money like water. All this goes back to as if you are pretending you are SINGLE. You ARE NOT single! If you only think of yourself and EXPECT the other person to give you what they don’t have then you need to be single!