Let's work smarter today, with the help of an Online Business Coach. 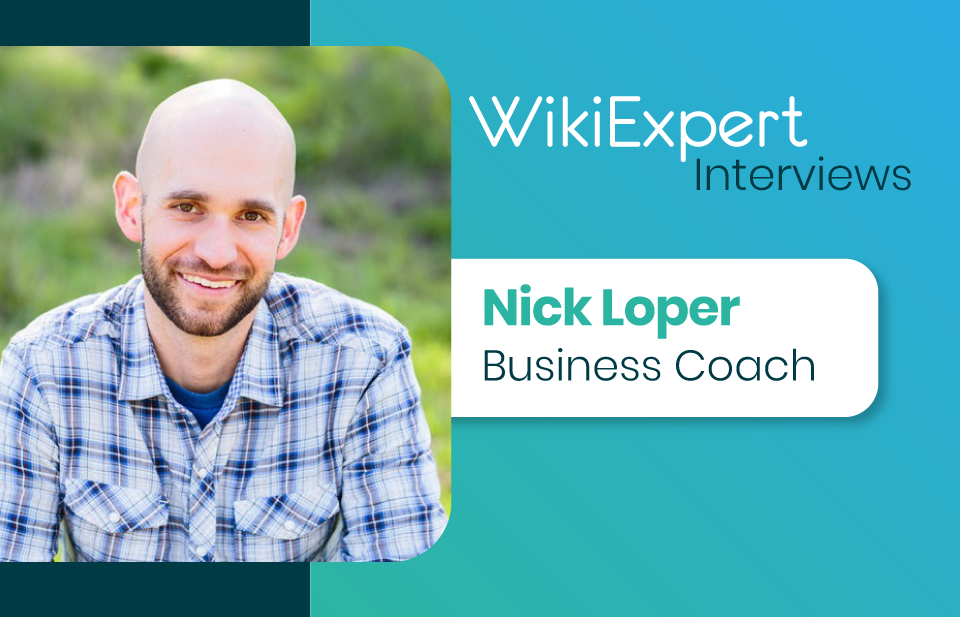 WikiExpert has been fortunate to have the opportunity to interview Nick Loper of Side Hustle. Initially, Nick had a full-time job but quit after some time to start up his own side hustle projects and his entrepreneurial journey. He has worked on various projects and works as a Business Coach. Nick strongly believes that everyone should work towards building financial freedom.

Let's start by talking about Nick's businesses, side hustle, the journey of coaching and his successes:

WikiExpert: So, I see that you had a full-time job at some point, what made you quit and become a side hustler/full-time Online Business Coach?

Nick Loper: I was always motivated to work on my side hustle (a comparison shopping site for footwear) because I hoped it could be my escape route from a life in corporate America. After 3 years of nights and weekends, I had a decent revenue history, at least enough to cover my monthly expenses, and made the leap. Years later, I started Side Hustle Nation and The Side Hustle Show podcast to share more about this lower-risk brand of entrepreneurship.

WikiExpert: What were your biggest challenges after leaving your full-time job and when starting up your business or should I say "side hustle"?

Nick Loper: The biggest challenge initially was the web development struggle of building a comparison shopping engine from scratch. I ended up connecting with a developer who lived near me on Guru.com, and actually worked with his team for almost a decade. Today I think there are tools that would help get that done much faster and cheaper.

WikiExpert: Enlighten us on what happened after you quit your job? What did you start up? How many "side hustles" did you have going on?

Nick Loper: At that time, the shoe site was my main focus. It wasn't exactly the "4 Hour Workweek" lifestyle I naively envisioned when I quit, but I wouldn't trade it for anything. Since then, I've experimented with lots of other projects, including freelancing, other affiliate websites, self-publishing, online courses, e-commerce, and more.

WikiExpert: On your journey to success, what was the most valuable lessons that you've learned?

Nick Loper: It's all an experiment. When I go into projects with that mindset, it lessens the sting of the inevitable failures along the way and positions everything as an opportunity to learn.

Nick Loper: It's scary! Even though I'd built the side hustle up to a certain point, I still questioned if I was "allowed" to quit my job. Could I really cut my own paycheck? What if it all blows up? One question to ask is to consider your real-life worst-case scenario. Of course, don't make a bet you can't afford to lose or put yourself in dire straits financially, but we tend to over-exaggerate the worst-case scenario in our minds.

WikiExpert: What is the biggest mistake that you've seen new entrepreneurs and hustlers make?

Nick Loper: Waiting for perfect timing or the perfect business idea. Neither exists.

Now, let's get to know a little more about Nick and what he can't live without and his favorite things to do:

WikiExpert: Name the three things that you love the most? And can't live without?

Nick Loper: My wife and family. The Side Hustle Nation community. Travel.

WikiExpert: If there was one thing you could change about the world, what would it be?

Nick Loper: I would love to see more science and entrepreneurship taught in schools. I think that might make a brighter future politically, financially, and environmentally.

WikiExpert: I see that you love traveling and have already visited 25 countries! Which is great! Which country did you enjoy traveling the most? And where's your next stop?

Nick Loper: Next stop is Hawaii! I think my all-time favorite city is Venice, which was just magical, but Vietnam was a surprise highlight from our trip to Asia a few years ago. Maybe I just had low expectations going in, but the food and people were awesome.

WikiExpert: Describe yourself in three words.

WikiExpert: Who is your role model and why?

Nick Loper: The person who's probably influenced me the most in the online business space is Pat Flynn from Smart Passive Income. I admire his work ethic, transparency, and commitment to helping his community.