The Ugly duckling story raises questions about bullying, discrimination, and the importance of being true to yourself. 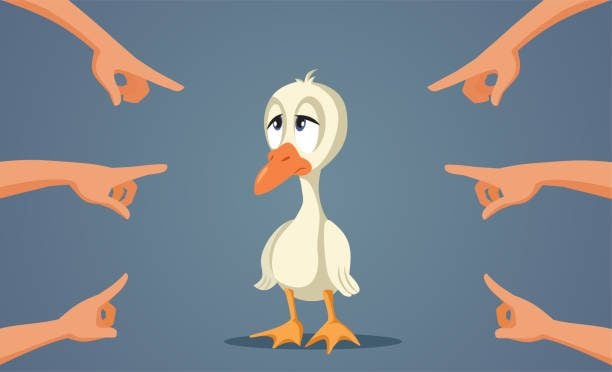 I am amazed by nature’s miracles in our life which often go unnoticed. Nature has an amazing way to restore lost balance. Do we need to be somebody to do good deeds and live up to our potential or can we live a simple life and add to the little things that make a big difference? Life sometimes shatters you down but when you look back, it’s all for a reason not to give you pain but to protect you from falling further. The hall of mirrors prophecy in 2012 mirrored shattering experiences for me too. This a reminder not to fill the void with mundane pleasures and only materialistic objects.

I received a call from my Indian old-time friend, almost like a younger sister asking me for monetary help. She was diagnosed with breast cancer, her husband was surviving kidney failure. Her young 15-month-old daughter stayed with her family. A huge medical bill shattered the family on the deathbed. I was in tears. I was going through a mid-life crisis, unable to help us, and felt hopeless, lost in my pain and sorrow. I asked for help from friends and family.
She fought bravely, but at the young age of 35, she departed us. Her death news came as a shock to me. Years later, her husband asked me if I wanted to see pictures of her daughter growing every day. I denied it and asked him not to let other people sympathize and pity her. Let her blossom into a beautiful, strong woman.

I am still processing the loss, remembering her laughter, strength, and the cold coffee days. My heart melted for the family. A similar jolt struck when my maternal uncle gave up on prostate cancer. He was hoping till the last moment, asking my brother if there is a way out. After all, life and death are not in our hands but what we can do with the present magical moments in between is up to us.

Elk hart Tolle says - mindfulness is understanding this voice in your head that tells you about what is happening around you or your life, self-talk you engage into - I or you, you shouldn’t have done that, you start getting annoyed with yourself. Another thought-But I couldn’t help it. Third thought peeping up why can’t I get out of the negative self-talk?

Being mindful is being conscious of your thoughts and not making the same unconscious choice again. If you reduce the volume of the hatred, and anger towards a person, you energetically cut the chords, so you can hear the intensity of the emotion and let go. When you take away the focus on the emotion or the person, the intensity drops and you take your power back. and free yourself.

Thoughts can make you well or sick if you give them the power..sometimes called overthinking. A perceptual toxic world we have been shown until now. Worry, and stress produces heat around the third eye chakra or wisdom center between the brows which causes migraines, dizziness, and other ailments. Stress is following other people’s values rather than walking your path or allowing others to influence your life.

When you come to understand the play of thoughts and feelings goes on without playing the push button, you can drop down to silence. All the mental chatter goes on and on. You cannot get rid of it. Eventually, the narrative gets boring and stops if you allow it to settle down into the deep inner knowing and silence. In that silence, you see the world as it is.

The poem was engraved on my heart while I embarked on a self-discovery journey.

Brave and True will I be….
Each good deed sets me free..
Each kind word makes me strong…
I will fight for the right, I will conquer the wrong.

The hardest thing is to go easy on yourself.

The power of self-talk or the mind narrative can change our lives.

In a small pond, lived a family of beautiful ducklings. Every morning with a quack quack here and a quack quack there, the mother duck woke up her babies. “Rise and shine, it’s time for our morning exercise,” she said.

All the ducklings woke up with a big yawn, tumbling on each other, rubbing their eyes trying to get in the queue to follow their mum. Off went the family for a swim and the hunt for food. One day, tired from the long walk, all the ducklings slept. Soon after, the mum went to check on her adorable babies. She noticed, there was an ugly duckling in the flock. She was certain, it didn’t belong to her family and wondered what she should do. She didn’t have the heart to throw away the baby. So every morning, along with the other ducklings, the ugly duckling joined the parade.

He hopped on the mother duck's back along with the other ducklings and went for a ride. He was very playful and naughty like his siblings. He was having a great time inspite of all the despair in his life. The angry mother quacked loudly at him and dropped him into the pond. He again followed them only to be pushed back by his siblings into the pond. The poor little innocent fellow looked behind if anyone would show up for him, follow him, shower love he was so worthy of... But he was disappointed and wandered into the forest alone. He sat by the pond for hours and cried and cried till the pond was filled with his tears.

The ducklings looked at the ugly duckling and moved away from him. No one played with him. They blamed him and yelled at him. He was sad and lonely. The Ugly Duckling looked very different from his siblings, who made fun of him and treated him horribly because he didn't look like them. He spent his time wandering about the mysteries of nature. Years went by. He survived the harsh winters in the cave. The ducklings grew into beautiful ducks with colorful feathers and walked with grace with their own families now.

The ugly duckling still was lonely and walked alone. He looked at his reflection and cried again. One day, he was mourning and contemplating sitting on the edge of the pond. On the arrival of spring, he saw many other white ducklings swimming and chirping happily in the water. They beckoned him to come and play with him. It was a pleasant surprise for him. He joined the raft and rejoiced in the company of his new friends. The newfound joy had brought him away from the other ducklings. He looked at himself again and discovered he was not an ugly duckling anymore. He was a beautiful swan and waddled gracefully with his siblings and family every day for the rest of his life.

The ugly duckling was rejected by the world but when he believed in himself and discovered he was a beautiful swan, he never looked back. So, when you feel humiliated, or frustrated, pause. Your reflection will highlight the beautiful, innocent soul. Our relationship with ourselves determines how the world treats us. The power of self-talk is very important especially when you are surrounded by negativity. We can either honour ourselves or devalue ourselves. Never give up on yourself.