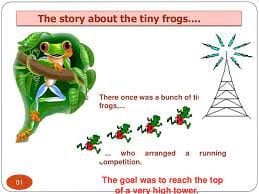 Our life is a unique journey of evolution of a spiritual being in a rare human form.

The story of the racing frogs is not only motivating but an eye-opener of the dog eats dog world and the negative elements within or without trying to pull us down from reaching our full potential. As the frogs climbed the tower; the crowd yelled, you will not make it to the top. Give up. Give up. More frogs began to fall. Except one tiny frog kept going and reached the top of the tower. He surprised everyone. Later they found out he was deaf. The moral of the story is to turn a deaf ear to the negative, insulting people in your life and befriend the inspiring and encouraging ones.

Another story of a community of frogs living in a well is equally fascinating. Their world was limited to the well; however, one day, a young athlete frog leaped out of the well to explore and was astonished to see the vast ocean. He hurriedly rushed back home to report his discovery. The learned, old, wise Dr. Frog with a wealth of froggish knowledge on different topics approached him and asked about his whereabouts. He excitedly told everyone about a vast body of water outside. The frogs started calculating. But how could they possibly understand the depths and far reaches of the ocean? Dr. Frog puffed up and burst eventually trying to understand the vastness of the ocean.

In our experience, the powers of speculation are always limited. The young frog had no power to think otherwise except relative to the well. Similarly, Universal truth is beyond the logical mind’s comprehension. Hence, even with great discoveries and scientific advancement, our world is a magical and mysterious creation. Questions like the origin of the universe or the existence of God remain unanswered due to scientific limitations.

It’s a tricky task to gauge the external world with the physiological limits placed by our imperfect senses and distorted social perceptions. Our eyes can only see the visible spectrum, so even if with a perfect 20/20 vision, plans, experiments fail, and new strategies are developed. Human ears are designed to catch sound waves from up to 20KHz only. Rodents, whales use ultrasonic sounds to communicate with their mates. We could be subjected to an illusion chasing a mirage of water on the road during summer, only to discover, it’s not real. So, even if Dr. Frog saw the ocean, he still would have the perceptual problems which couldn’t be overlooked as it was based on the information received through limited senses.

In a nutshell, we are all imperfectly perfect human beings. We learn and grow through our mistakes. To err is human and scientific information can be influenced by the intellect and emotions of the ‘ordinary human beings.’

Vedic literature is a great source of knowledge to attain the Absolute Truth which can be contradicted by Science on many fronts. In short, Lord Krishna’s devotees have undeterred faith in bhakti-yoga or devotional service. The knowledge gained on this descending path is of equal value when compared to scientific facts. Acceptance of the transcendental knowledge achieved through bhakti-yoga can be the torchlight to remove the blind chains of darkness and ignorance. Also, help us rise above the illusions, mistakes, and materialistic minds’ defects to strike a mindful balance.

Thus, we cannot understand the entire creation or the Ananta by our tiny brain and limited thinking ability; hence, we often hear our elders stating give your best and leave the rest to God. The delays showcase protection rather than obstacles. It allows us to nurture patience and get out of the compulsion or instant gratification mode. Tremendous shakti or human potential stored within can unfold on a self-discovery journey enabling us to discover our creative purpose on earth with peace as the goal and forgiveness, happiness as the function.

Tiny insects like ants build anthills, beavers build lodges and curious Dr. Frogs inspire us to embrace our unique journeys and the evolution of a spiritual being in the rare human form as every edition is limited yet charming in its own way.

Disclaimer: The above article is based on the author’s limited knowledge about the extensive topic of spirituality.