Workplace mobs thrive in unhealthy organizational cultures. What are the leaders' traits? Why do some employees participate?

Workplace mobbing is the harshest form of bullying and is created by an unhealthy organizational culture. Mobbing aims to destroy targets with blustery emotional attacks. The Workplace Bullying Institute reveals bullies occupy various spheres of influence: "bosses (75%), co-workers/peers (18%), and subordinates (7%)" (2012). Workplace abuse leaders are of both genders and all socioeconomic levels. Disproportionately female employees are targeted more; and most of the time the perpetrators are women. When establishing a mob, a workplace abuse leader is extraordinarily adept in the art of deception and character assassination.

Traits of the Abuse Leader

Narcissism is a personality disorder in which the individual possesses an intense admiration of self and a fierce sense of entitlement. Narcissists create gods of themselves. In the Bible, some people that exhibited these traits were Absalom, Jezebel, and the Pharaohs of Ancient Egypt. Some of the modern world's public figures display narcissistic traits. Our popular culture of selfies, influencers, and divas or divos has nurtured an inflated sense of self. Tragically, even some religions attempt to make demi-gods of their followers. The spiritual root of this dysfunction is extreme pride, vanity, and self-centeredness.

The narcissistic bully, in the workplace, desires leadership because of an inordinate sense of entitlement. To achieve their goal of eliminating the target they become very calculating. “He deviseth mischief upon his bed, he setteth himself in a way that is not good, he abhorreth not evil” (Psalms 36:4). They justify their misdeeds and recruit others to validate their behavior and blame the target. An abuse leader will sometimes resort to gaslighting an employee who repudiates or exposes them., They tend to have no remorse when their maltreatment of others is uncovered. In counseling, change is very challenging for the narcissist.

Sociopathy is an anti-social personality disorder in which the person disregards right or wrong. Anti-social refers to those who go against societal rules and norms; It does not imply they lack socialization skills. Sociopathic bullies ruthlessly violate the rights of others and have no guilt. These individuals have a weakened conscience and may have no emotional expressiveness. After many unscrupulous life choices, their ability to discern right and wrong has waned. The Bible refers to this state as a reprobate mind. A sociopath is also volatile and tends to have fits of rage. Extreme childhood trauma triggers this personality disorder, and thus, the environment engenders the propensity for sociopathy. The root of this dysfunction is deep anger or resentment and a lack of empathy.

Psychopaths have an antisocial-personality disorder like sociopaths; however, this dysfunction may also have violent behaviors. They appear charming but are predatory in nature; therefore, the cruelest of the three personality disorders. These individuals fail to form strong emotional attachments in relationships. Psychopaths take pleasure in seeing individuals suffer and in humiliating them. They have no conscience, so they rarely have any remorse for their misdeeds. Since they are unable to feel emotions, they mimic them. The root of this disorder is an underdeveloped part of the brain so, psychopaths are deemed genetically predisposed to these traits.

In the workplace, these individuals seek leadership because it equates to power. Psychopaths enjoy creating chaos and bullying others. They may appear very charming, but it is a tool used to manipulate others. Psalms 36:3 states, “The words of his mouth are iniquity and deceit: he hath left off to be wise, and to do good.” They see people as objects and are more calculating and dangerous than narcissists or sociopaths. Psychopathic world leaders love to control and if they succumb to violent tendencies some have engaged in democide. 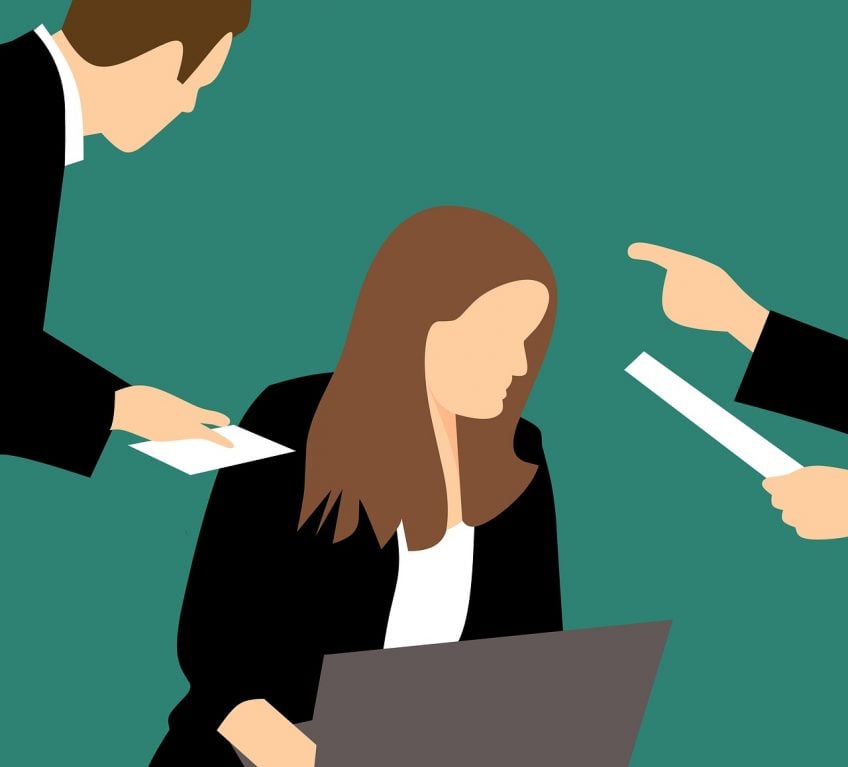 Formation of a Workplace Mob

A workplace mob is much like an organized crime group. Unless the abuse leaders are senior-level employees, they have to gain their favor or validation. Some abuse leaders infiltrate important committees in the company to widen their sphere of influence. King David said in Psalm 37:35, "I have seen the wicked in great power, and spreading himself like a green bay tree." Abuse leaders recruit participants who benefit them and also lack empathy. The participants are in alignment with the abuse leaders' malintent and goals. Some mobs amass because of their illusory perceptions of the workplace and a target. Sometimes the illusion is tinged with race or gender bias. Some in the mob harass the target; others become hypercritical observers or whisperers. The gatekeepers give leaders access to confidential information about the target such as personal telephone numbers, home, or email addresses. Often gatekeepers are administrative assistants in an office. Workplace mobs congeal under a campaign of rumormongering unbeknownst to the target.

Mob leaders, who severely lack empathy, recruit employees who will benefit in some way from group membership. Some members feel protected by the group. The group will retaliate when targets defend themselves against the group. Others feel like the group gives them more power or higher status. They may feel the group will help them avoid discipline for subpar productivity or unprofessional behavior. Some perceive the mob as a social network; members may enjoy spending time together and nurturing their relationships. They may use social media to connect and support each other. Yet, other members join to avoid becoming a target. However, all members share three characteristics they lack courage, integrity, and empathy.

The process of rumormongering is like a blistery fire. The whispers crescendo; it is pervasive and endless. The mob’s serpentine verbal assaults are intended to unsettle the target and impact their work performance. Even people who befriend the target, the mob makes privy to unfounded rumors. The rumors alter employees’ perceptions of the target and paint an unflattering picture. The mob participants are predators scrutinizing every move the target makes to learn habits and behaviors. They study with whom the target interacts, their work habits, what triggers their emotional states, and their reactions to the abuse. The group may develop a demeaning nickname for the target to further discredit them. Others may attempt to get the target to speak negatively about an employee or the organizational culture to further ostracize them.

Is there any way to de-escalate a workplace mob or transform such a toxic organizational culture? Human resource departments need to receive training in workplace bullying and mobbing and updates on the anti-bullying legislation in their state. Employees need to consistently be made aware of the detriments of workplace bullying and mobbing. Employees need to know they can refuse to participate in a mob or refuse to become silent observers. But institutions need to have a recourse for employees to report the bullying behaviors without retribution from the mob. In addition to the harassment policy, companies need to implement a strident anti-bullying policy that makes mobbing a crime. Harassment policies are not very supportive of mobbing targets. Workplaces need to make it clear they support targets and will not encourage or reward abuse leaders and participants. Such a formidable stance will sometimes counter even residual bullying when disciplinary action occurs.

In Conclusion, abuse leaders have personality traits that explain why they target some employees. Understanding human motivations in the workplace reveal how leaders attract mob participants. Mobbing is a serious health hazard in toxic workplaces. States and workplaces must institute stringent policies that protect employees from this type of abuse. A safe workplace is a universal human right in which all employees must demand.