How To Survive Office Bullies And Win!

Just like anything else in society alot has changed, in the work force that would not have been tolerated such as Bullying. 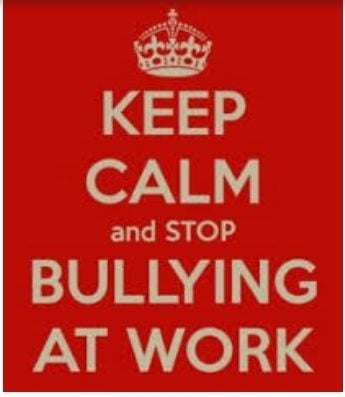 Office  bullying is defined  as  ranging  from isolating, stalking, verbally abusive threatening, sabotaging, relentless attack on those that are  deemed as targets or victims.

The Bully in the work place,  has a personal  vendetta and whosoever he or she  views as a personal threat becomes a "target" The target  is a co-worker, the  office bully or "mobbing"which is a group  of office co-worker's  that  will select  another  Co-worker to be their victim to target  by literally bullying  their Co-worker in the office  or work place.

Ordinarily as adults some of us tend to  think of bullying  as something children  might  do towards another child  by being  mean to another  child. Some  children  were actually  killing themselves from being  bullied at school and more schools  and officials  started  stepping  up with awareness  campaigns to help combat or an effort to stop  bullying or "Mobbing which  is a term used for  more than one bully following someone  as a target to cause that person verbal, emotional  and even physical harm as well  as  abusive behavior to a person becoming  a victim to bullying.

This, type of behavior whether  on the playground  or at the Work Place or on the  road..anywhere  is cruel and needs to not be   tolerated in  society as just regular behavior.  Both, children  and adults  should  not have  to encounter any type of abuse, not at home,  school  or the work place!

Being personally a target:

Personally, I  have been targeted in both elementary as child, in college and in the  work force as an adult too! So, I  definitely, know  what bullying feels like. I  remember  thinking.. when I was bullied at work one day I'm  an adult now ..and  I still felt that feeling  of why me?..

Realization and prepared against bullying.

Once I realized that what was about to happen was work place  bullying against  me..I then went  to war on my behalf in the work place. As, a child I  told the adults, and they  handled  the bullying, for me.  However, as an adult  myself, I had to find a way to stand up for myself and  I did !

I was being targeted by two co- worker's  that teamed  up  on me at lunch  time because,  I  wore a complimentary nice dress to work  one day, no one had an issue  with  my dress  except for those  two women, and made an issue during  the middle  of lunch  time. Yep!

Bully's  use all sorts of tactics.

As other co-worker's  were coming  into  the lunch  area, and told  me how nice I looked..These to earth  disturbers  decided  that I  shouldn't   have worn the dress, I knew  they were  jealous and I didn't  give it much of my energy as  to what they  thought,  weeks later both  women admited they were jealous of not  just the  dress, but also, how I carry myself. Then, the bullying  started.. again, by one of the  women that tried  hard to body shame me at lunch  time.

I documented everything.. I mean..everything! each time the bully said or did or even acted  in an intimidating  way..I wrote their, action, behavior  or deed down and immediately  went to my boss at the time, who was slow  in responding  to my  concerns about  the office  Bully, I  was in his office  so much, it was like my second  home. lol. I was being  accused  of harassing  the Co- worker instead oh her actually, harassing me! I was to be terminated ..

She would literally pass me in the hall way  and run to the office and  create  a lie and tell staff  and the supervisor, I was harassing  her.She would  have been  great actress..even  to  tears rolling  down  her face. It was unbelievable!

Only Until another Co-worker  overheard  the  bully talking with one  of the mobbing bullies  conversations  regarding  me and reported on  the work place bully's  on my behalf and the camera  in the building caught  her stalking me! Finally,  I  was taken  seriously.

However  learned a huge lesson. Some co-workers  will not like you or me, even  to the point  of trying  to ruin my reputation, provoke  you or me and some are so bold as to want to fight and will get a mobb  of other co- workers that will  team up against  the target  they see as a threat. I also,  realized that I came  out of that situation  stronger.

The bully's technique  is to study  you  to a science  and then attack  every  area they think  you are lacking  in..low self esteem well,  here you  go, being passive aggressive  and verbally assaulting followed  up with.."I  was just  joking."

What does being  a target  actually  have to do with  the job? Absolutely nothing,  the work force  bully  is looking  for someone  to take their  aggression  out on.

Now,  being the target can have actually  nothing  to do with  the job at hand, it can be based  on pettiness  and Jealousy  example  the target coming to work  everyday or being  a nice person, getting  compliments on job  performance,  looks happy..anything imaginable  in the mind set of the bully  that triggers envy, Jealousy  and hate.

I will also  want to add there is a form  of Psychological  warfare  used against  the victim  as well, like in my situation  even  if I  smiled  at the the one perpetrator, I  forgot  that I was at war in the office and smiling is part of my personality, she would  report me as harassing  her, and although  my reputation  for three  years at that job was excellent,I was the one  initially accused.  Only, when the bully decided  to leave the job  after harassing  other co-worker's  and even supervisor's was she let go, however  the damage  was already done.

I still smile though, I  won't  let anyone  take my smile  from me, that's  my super  power and God's gift  to me. No matter  what!

1). Jealousy, people  don't  try to destroy  those they don't  see as a threat.  Jealously  of how the target  dresses, gets along  well  with other's,  courteous, happy..yes! All the qualities  that  the target has and the bully does not have and or does not want to improve on in their  own life, so they choose  someone  that  they think  will  be intimidated. At that moment,  they found  out..They  grabbed  a tiger by the tail,  I wasn't  having  non of it! I mentally  fought  back and held  onto  my dignity  an pride.

2). The target  is focused does their job well.

3). Happy, there is not too many  people  happy  in these  times, based  on their  thoughts, actions  and deeds, so when they see you, for example with  your "Happy go lucky  self" You become  a  huge threat, your not complaining,  about  working  in the midst of a virus, your mind your business,  helpful, smart, naturally  kind and have awesome  qualities  on and off the job, that to them the bully or bully's job is to therefore,  create  chaos in your life in an attempt  to make you miserable by any and I mean  any means even if they Sabotage  your work, steal things off your desk, create a lie against  you to get you fired, pretend  to be your friend,  then you learn you  have an office enemy.

So, how do  you deal with  an enemy  that  not only works  with  you, but also, makes it his or her second  job to attack  you, on every unimaginable  level that can destroy,  your mental,  physical,emotional, psychological  and even  for  some spiritual well being and means of  living  and having  your basic needs  met.

I  suggest  you learn how to fight, yep fight!.. with the mind!

I mean know  your worth..not financial,  but who are you? what do you bring  to the table as an overall type  of person? Are there  things in your  life  you want  or need  to change or learn about  yourself, a goal  you personally  want to reach? In other words  in order  to win this battle  you will  have to introspect yourself, don't  wait  for a bully  to be your  motivation  though. I  found  that the more you are  personally  content and loving yourself,  it's harder  for hater's  to attack  and destroy  you,  but, as long  as you don't  have a I know and love myself plan...It's  easier  to be that, "Why Are We In The Office  Person.." Don't  be them. "Well, I get along  with  everybody"  but does  everbody  get along with  you? That's the question. This is why  you must know  your  self worth.

2). BE READY..Document immediately  each incident leave nothing out, no matter  how  trivial  it may seem. You will  need  to be clear  and ready  for whatever  if you are called  into  the office.

3). Study  your  opponent,  yes! sad to say, but some  of these  jobs nowadays, are like  battle fields,  you wake up get dressed  drive or walk  to a hostile  and  toxic  environment  for  eight or more hours  to do combat  with  in some cases like mine  with one or more  co-workers  or.."opponents" and if you are not  fortunate  to have a fair understanding  and  discerning  boss it's even more difficult  to say the least.

4.)Remember who you are:

Remember  who you are on a personal  and professional  level,  this too shall  pass. If you are a sensitive person or you cry when  you get angry and want to cry..befor the tears roll, please, excuse  yourself or swiftly go into  the bathroom and get it out! Why? because,  you  want  to be aware  that you have a co-worker  bully and you may  have more  than one and if your  seen crying  you,  may have  to deal with more bullying  from  other co-workers as well.

If you are being  work place  bullied,  know  your bully schedule of attack, is it during  lunch time when  everyone  is in the lunch  room and they  shoot  you an evil look? Or during  bathroom  break  and they follow you in the bathroom..stalking or when i'ts  time to go home and they deliberately  get behind  you in line to intemidate you, notice  the time and their  behavior.

6). Know  your trigger: For example  if you were a target  of bullying as a child that might  be a trigger for you especially  if you reflect  back in your mind. I  would  suggest,  breathing,  self talk such as "That was the this is now " and stand up for  your younger self.

Have some  favorite  affirmations with  you for that  just in case  moment, because  you want to have your mind focused  clear and positive  as possible inspite  the  challenge you may have to face, not too many  and not too  many why me sessions.  Honestly,  Why you? Because,  they are not you! Oftentimes,  too many of us were raised  and brought up to not see our own beauty from the inside and out and unfortunately  this hole in our hearts  allows  us to become  targets  to bullying and other  abuse from  other's ..But, its a  New day!